Angola’s National Oil, Gas and Biofuel’s Agency (ANPG’s) permanent negotiations rule will strengthen the agency’s position as concessionaire allowing for robust negotiations to occur independently, without bidding rounds or limited oil concession strategies. Energy Capital & Power spoke with ANPG Administrator Cesar Paxe to discuss the new framework that will allow oil and gas companies to permanently reach out to the concessionaire agency to negotiate licenses for oil and gas blocks. This striking innovation will break through red tape and help accelerate the exploration drive in the country.

WHAT IS BEHIND THIS NOVEL APPROACH BY ANPG TO CONTRACT NEGOTIATION?

IS THIS APPLICABLE TO ALL OIL AND GAS ACTIVITIES IN THE COUNTRY?

No, there are only a few circumstances in which this is possible in accordance to the oil block requirements foreseen in our proposed diploma. They include, firstly, oil blocks that have been tendered but have not received valid bids, secondly, free areas inside blocks already in concession, and finally owned concessions by ANPG, not intended for any type of partnership model. The latter are the required circumstances that can be subject to permanent negotiations.

CAN ANYONE WALK INTO ANPG FOR OIL BLOCK NEGOTIATIONS?

Yes, however, interested parties need to meet a detailed criterion when showcasing their financial and technical capability. On the other hand, if an oil operator identifies an area of interest, we can immediately submit this area to the permanent negotiations rule, in which we submit them to the market, in a showcasing format, and in a non-stop system we begin negotiations until the deal is closed. The head of Angola´s oil sector submitted the proposal at the end of August, it has already been approved and in the coming days the new permanent negotiation rules will be published in the national gazette.

HOW WILL THE PERMANENT NEGOTIATIONS RULE ACCELERATE INVESTMENT AND GROWTH IN ANGOLA?

Currently, investors need to wait for a bidding process, and in times where no biddings take place, the investment window remains idle. Once the diploma is published, investors can go directly to the concessionaire and present their interest in obtaining an oil concession for an available oil block.

Essentially, with the implementation of a permanent negotiation rules, what will happen is that even in a year that there will be no bids, like 2022, any investor interested in the oil sector in Angola can “window-shop” and submit a proposal to negotiate a block without waiting for a bidding opportunity.

WHAT COMPLIANCE\CONTROL MECHANISMS WILL BE IN PLACE TO ENSURE THE SUCCESS OF THIS NEW RULE?

What is interesting in this project of permanent negotiations is that it does not conflict with rules that already exist today. When ANPG intends for a direct negotiation, we must comply with the rules already in place.

Our system does not allow secret negotiations, it follows legal guidelines, and requires a 100% level of transparency and open communication. All steps of the negotiation are done with public knowledge, the concessionaire is obliged to publish all steps in the negotiation process. The permanent negotiations rule was also conceived to bring more fluidity to the negotiation of oil block concessions. At ANPG, we are not revoking or conflicting with anything that already exists, we are just creating a unique platform for trading and promoting oil assets.

WHAT WILL BE THE SOCIO-ECONOMIC IMPACT OF THE PERMANENT NEGOTIATIONS RULE?

As we constantly heard throughout the Angola Oil & Gas 2021 conference, oil-based resources will continue to be responsible for our survival. It’s imperative that we know our geology better and add more value to it. In addition to the 50 concessions that we have planned, we also now have the possibility to associate any free blocks within the strategy to the permanent negotiations rule. Our expectation is always the same, with more concessions, more exploration, more production, more jobs, and consequently more revenue for our government. We are committed to create wealth to the Angolan’s Government and therefore committed to implement actions to attenuate the decline of the Oil production.

Angola, with a better geological knowledge can explore more Oil, increase production reserves and consequently creating more jobs. We are optimistic that the permanent negotiations rule, will accelerate growth not only on Angola´s oil and gas industry but on the national economy in general. 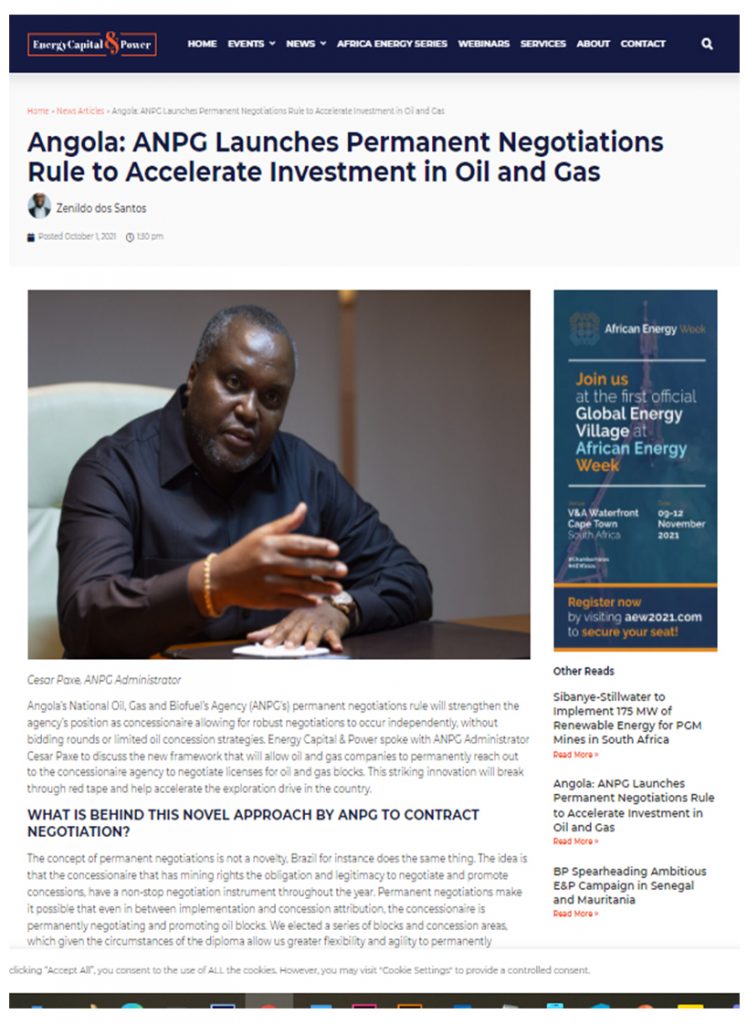